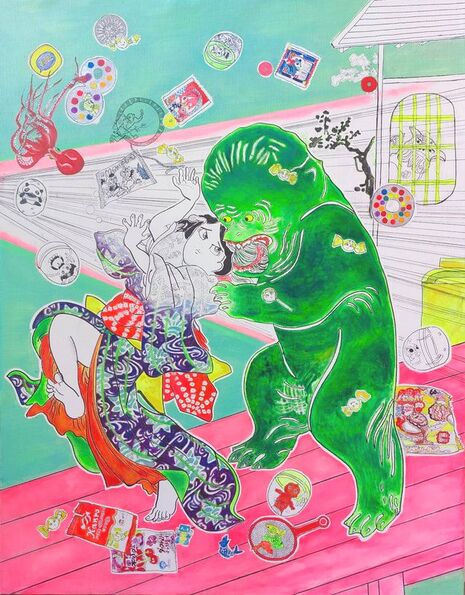 It is not clear where the oil painting ends and the manga starts.
That is exactly the beginning of my curiosity and why I paint.
（—Mikako Arai）

The artist's style has been described as radical, developing a manga narrative within the world of oil painting, a Western technique, and sometimes using a self-portrait as a double image. Vivid yet softly colored, flat yet evocative of a storyline, Arai’s paintings are full of depth.

Invited by Kenny Schachter, an artist, curator and writer based in New York, Arai participated in his exhibition "Unsafe at Any Speed" as a guest artist in 2022. With this opportunity, Arai’s expression changed to conviction as she continued her exploration of multicultural art.

This exhibition will feature 20 of her new works. Detailed and pop colored but elegance, they need fresh eyes and we hope they take the viewers to another step of marriage between the oil painting and manga.

MIKAKO ARAI is a Tokyo-based painter. She studied Psychology and Arts in the United States. After her graduation, she has actively continued to paint under Kotaro Migishi and Tomiya Nishimura. Notable exhibition Shanghai Art Show in 2010 and it was the beginning of her new postmodernism potential. Her art has been transformed into a fresh styled oil painting of self-portraits in manga as a double image. Arai’s involvement in the Bruce Lurie Gallery's "TOY stories" exhibition in the United States has contributed to an exceptional recognition of her independent and sharp-edged work. In 2022, she was invited as a guest artist to a group exhibition "Unsafe at any speed" by New York- based artist, curator and writer Kenny Schachter. Arai has been exhibited a various Art Fair in L.A., Shanghai, Seoul, Hong Kong, and more. Arai continuously pursues the multi-cultural art style, as an extension of figurative expression.